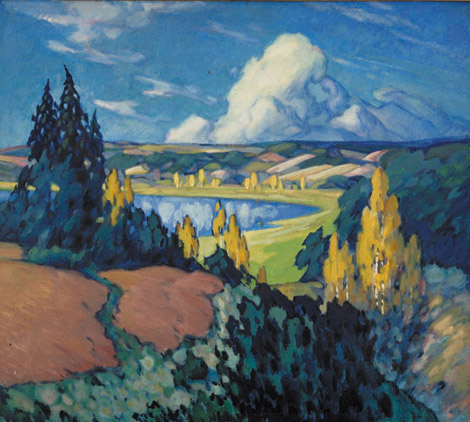 Ants Murakin’s use of colours never stops to surprise us. Despite the fact that several of his monotypes, having been accomplished abroad (through which we actually know Murakin in the first place), have given the grounds to take a deeper look into his talent, make the viewers of his works to ask: is it really Murakin? The landscape, originating from his early creative period, is one of such examples. Composition is not worse than the artist’s use of brush and colours. Original is also the choice of the work’s location, the foreshortening. While looking at the painting, it seems as if the artist has climbed somewhere higher, has climbed either a mountain or a cliff and is looking down from there. The landscape opens up in front of him as if being placed on the palm of the hand, offering the possibility to choose the most spectacular motif.
“Õhtupoolik” brings to the viewer romantically dark and spectacular colours, to which is adding mystery the slanting light. The shades are powerful, even very powerful and clearly differing from each other. The whole painting seems to be telling us of something transitory and unreachable, of something concealed and dream-like.