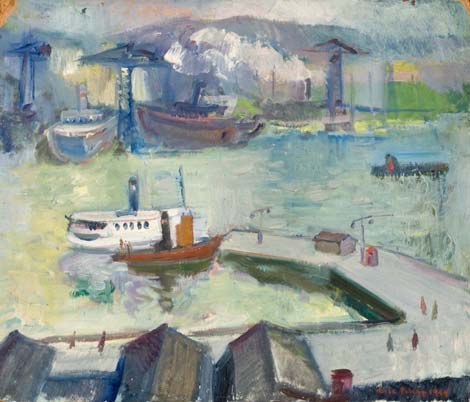 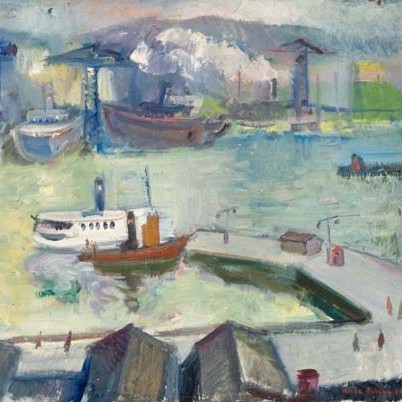 Erich Pehap took almost everything from the art-related education, which was offered in Estonia in the 1930ies. In addition to “Pallas”, Pehap studied also in the State Artistic Vocational School. Even more colourful is the line of specialities, which he studied: painting, graphical art, applied graphical art, and ceramics. No wonder that in the following years Pehap worked as a teacher of drawing. But while having started to work as a freelancer, he was forced to leave first for Finland, then for Sweden and in 1949 for Canada.
Harbour is a popular theme among the Estonian authors, having started in the 1930ies, even though it has been noticed that in spite of the status of a sea country, the sea theme entered the Estonian art only with Richard Uutmaa and Eerik Haamer. After leaving Estonia, many authors depicted harbour and ships as symbols of leaving and arrival. Still, Pehap’s work is different. He does not try to enter sad tones into the motif, he really portraits a harbour. This environment, being so different from everyday routine, has obviously enchanted the artist with its mood: ships peacefully floating at the pier, large tankers waiting, warehouses, people, crane. Pehap renders in peaceful bluish hues everything, which in his opinion constitutes the core of a harbour.