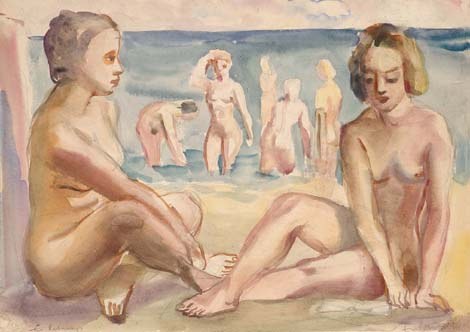 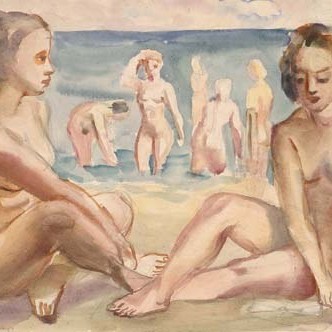 The work of Erich Pehap could be compared with the early paintings of Nigul Espe and Priidu Aavik. In all of the cases we are dealing with authors, who directly before starting of the WW II were on their way of becoming significant arists, but whose later creative heritage suffered due to reasons outside art to such an extent that their fresher and more honest works remained in the beginning of the 1940ies. By today of the early creative heritage of Pehap are only known some graphical sheets, but as salient as in the case of graphical art was Pehap in his water-colour creation.
“Rannas” was most probably accomplished during Pehap’s spending his summer vacation in his hometown Viljandi. Typically to a holiday, Pehap has not regarded here of importance establishing of a firm studying process, but has found fascination in a moment. This work is a joy of one day, the artist’s ability to find inspiration in an ordinary day and of the ability to address a simple situation through art.