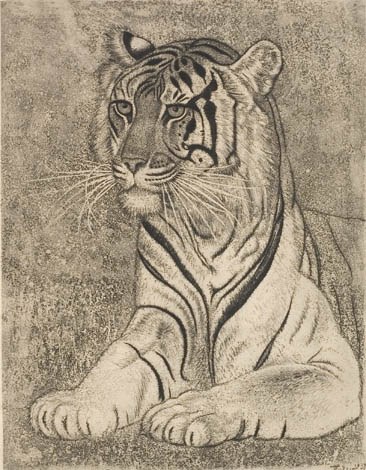 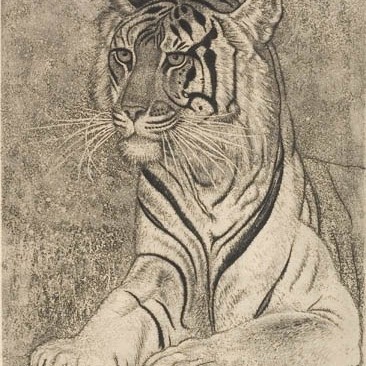 Eduard Wiiralt’s yearning for “peace, harmony and cleanness of soul” (Mai Levin) deepened more in the 1930ies. It is characteristic that exactly at that time children and animals became the artist’s favourite models. Among the latter created especial attention graceful felines, among those in their turn tigers. Wiiralt wrote from Paris:” Unfortunately the present material is one-sided; tigers and cats. I have got around twenty sheets of drawings of tigers”.
In case of “Tiiger”, having been drawn in the year 1937, it is mentioned that from one side it is the typical Wiiralt of that period, where the technical perfectness and the elaboration of the sheet have even more deepened. The tiger is being depicted extremely thoroughly and exactly, onto the picture surface have been brought only the most interesting and expressive traits of a tiger. From another hand, Mai Levin mentiones that it is “Tiiger”, which is positioned slightly separately from the general core of Wiiralt’s creation, having been accomplished in aquatint, which creates a specific “gnarled” picture structure. It could seem odd, but can clearly be felt, how the author has finally found his peace and firmness of mind.