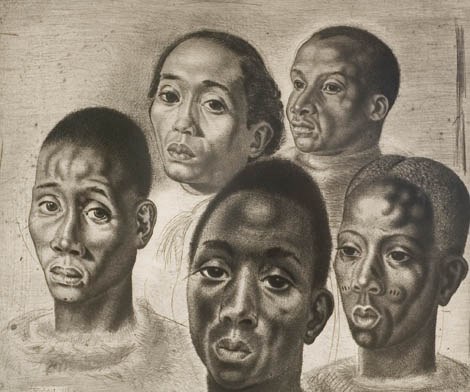 In the creation of Eduard Wiiralt should certainly be noticed, how clearly different stages differ from each other. There are no considerable obvious changes: still the same technical perfectess, brilliant drawing skill, in which he most probably will never be surpassed in the Estonian art history, grotesque manner of approach, forceful symbols. Still, works by Wiiralt are divided for example into the Estonian period, when he as one of the favourite students of Konrad Mägi was still studying in “Pallas” under the hand of German lecturers, and the Parisian period, when prevailing were visionary compositions. This period, which to a great extent was based on the personal tragedy, finished quite abruptly in 1933. From here on starts the third period, which has been regarded as the most peaceful and self-confident one.
“Neegripead” is a unique work, as it is in between the visionary and calmed Wiiralt, on a certain breakpoint. It is the work, which is being characterized by Hanno Kompus as the beginning of a new era. Mai Levin adds:” The artist has been able to open deeply up the soul of his dark-skinned models and to forward racially typical traits”. By using different models, Wiiralt has reached in this work the state, which in addition to the ethical categories – the abovementioned technical perfectness, maturity of form, elaboration of composition, softness of contours – can also be handled through psychology. Mainly it is noticed that here the gtotesque is starting to regress, being replaced by a more serious attitude. Furthermore: we are dealing with a work, being typically melancholic to the new period. “And melancholy,” adds Hanno Kompus, “can first of all be found in “Neegripead””.