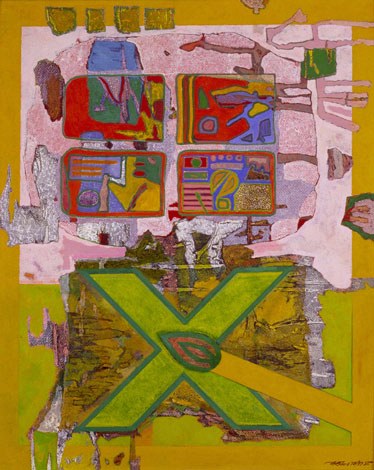 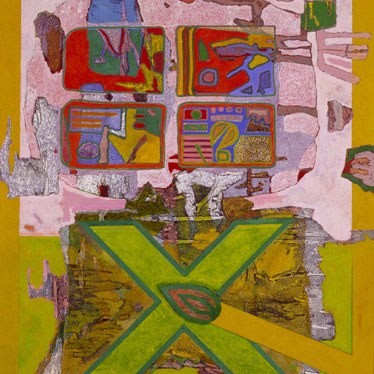 Endel Kõks can be boldly called an Estonian artist, who has had one of the most alert sense of colours through ages. Just before the start of the World War II Kõks graduated from “Pallas” as the student of Ado Vabbe and formed with Lepo Mikko and Elmar Kits the legendary “Tartu triplet”. Still, Mikko, Kits and Kõks achieved their artistic peaks differently. When the first artist concentrated mainly on form rhythms and the second one on abstract games, then Kõks was already at that time interested in the problems of pure colours that had acquired its significance since the Fauvists. After the forced leaving for Germany the style of Kõks became even more bold and bright.
One of the most important part of the creation of Kõks is formed by his observations of signs and symbolic worlds. “Sigma x green” is a powerful example of the artist’s desire to interpret archaic signs, accomplishing it in the Endel Kõks-style through colours. The author has not chosen here at approaching of the subject the passive wondering of an etnographer, but active interpreting of an artist. In the course of such action ancient symbols change, carrying not anymore religious, but purely aesthetical messages.