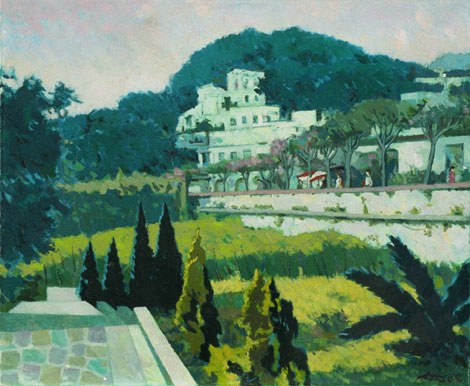 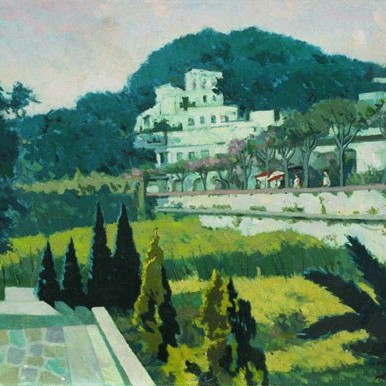 Endel Kõks can be boldly called an Estonian artist, who has had one of the most alert sense of colours through ages. Just before the start of the World War II Kõks graduated from “Pallas” as the student of Ado Vabbe and formed with Lepo Mikko and Elmar Kits the legendary “Tartu triplet”. Still, Mikko, Kits and Kõks achieved their artistic peaks differently. When the first artist concentrated mainly on form rhythms and the second one on abstract games, then Kõks was already at that time interested in the problems of pure colours that had acquired its significance since the Fauvists. After the forced leaving for Germany the style of Kõks became even more bold and bright.

“Capri” forms a surprising bridge with the pre-world creation of the artist. When at that period he used surprisingly bright colours at depicting of the homeland, then in case of “Capri” the artist has been able to paint right in the centre of the southern abundance of colours. Green is not stale and melancholic anymore, it is powerful. The faded white of exotic houses is not a sign of rejection, but of age and charging with meanings. But what is here of the utmost importance to which Kõks pays the attention to, is the light. Painting the invisible into visible has been one of the most important challenges for him, by using reflections and shadows on the painting surface, Kõks has skilfully brought out the difference of southern light. This is a mystical shade, which is even slightly mataphysical, that rather absorbs shadows than creates them.