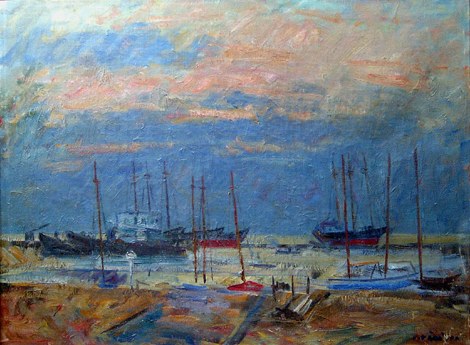 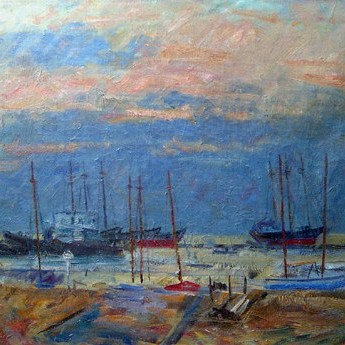 Next to Elmar Kits, Aleksander Vardi and Andrus Johani, also Voldemar Väli was one of the students of Ado Vabbe. Similarily to other celebrated painters was Väli in parallel both professor at the art school and an active artist. His life story shows also his travels around the world on a ship that in a strange way has also been reflected in Väli's works. Since the second half of the 1940ies Väli was known as a portrait-painter, who in addition to painting of cultural celebrities asked a harbour captain to be his model. Reflecting of fishermen's life and portraiting of harbour views has always been the second very important aspect of Väli's creation.
Just the harbour, the border between the land and sea, where begins communication between man and the sea, has captured the artist also this time. A still-life with boats and little ships marks for Väli the moment, when the daily work is done and tomorrow is still ahead of us. Let us pay attention - we see no human beings in the picture. But we can be certain that they just have been here. And that they will come again. And again.