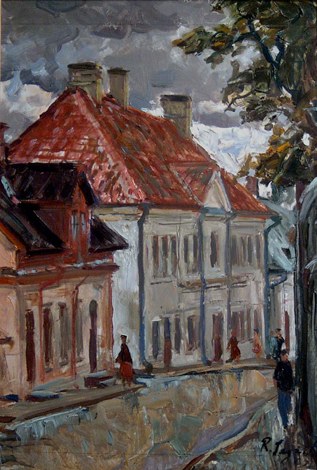 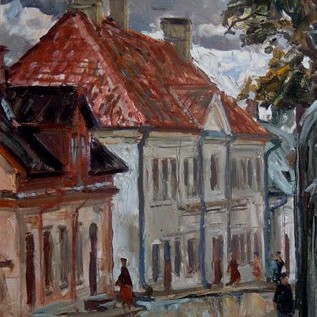 Teachers of Richard Sagrits were several important names: Günther Reindorff and Roman Nyman in the State Artistic Vocational School and Ado Vabbe and Nikolai Triik in "Pallas". Sagrits studied drawing, decoration painting, graphical art and also painting. At the same time he already started participation at exhibitions and became after the World War II one of the most recognized lanscape painters.
Sagrits, whose home was at Virumaa, returned to his native places again and again. When at the previous auction it was possible to see his Karepa view with hay-mowers, then this time Sagrits has taken a bus and driven to the town, where he went to school up to the year 1928 - to Rakvere. He gets off the bus, walks a little back the street he came from and sets up his easel on the town main street. It is the beginning of September and the sky is turning grey, people dress more heavily. Sagrits is painting. Does he already know that the local lore museum across the street will once become the main home for his works?