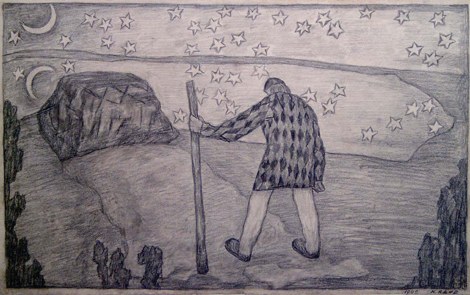 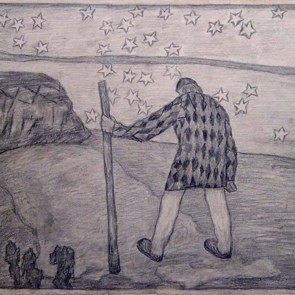 We can say without exaggerations that the Estonian art would not be complete without Kristjan Raud and Kristjan Raud would not be quite himself without the Estonian art. Raud, having absorbed so deeply into his nation and its destiny, could not have limited himself only by artistic means. His grasp was immensely wider, "the Estonian thing" became the essence of his art that the author explored as seriously as Tammsaare did. The archaic drawing manner of Raud only supports the aim, melted into the piece of work: to bring out, preserve and defend values that in the artist's opinion are eternal. After breaking out of the World War II and in the course of following occupations of Estonia Raud was more than 75 years of age. He cares more about the destiny of the nation than he had done ever before and according to the words of the reasearchers of the Raud creation the artistic value of the artist's works is the continuation to the superb shape of the 30ies. In the year 1942 both key words, charcterizing Raud's creation, meet in the current work. As the third line the picture is entered by the topic of people and stars that was started by Raud at the beginning of the century in the legendary series "Man and night". But the starry sky is not romantically harmonious and safe anymore, the sky has been turned upside down and the world sytem is not what it used to be. Man, standing under the stars, does not take dance positions anymore, neither slides he lightly across the landscape. It is a work, into which Raud has poured everything that has ever been of importance to him in life and art: the nation's vitality, destiny of the man, difficult times. It is most probably one of the last works by Raud, where if wanted we can detect also the author's symbolistic detachment from the pointless noisy world clamour. Detachment along a well-known path towards himself...