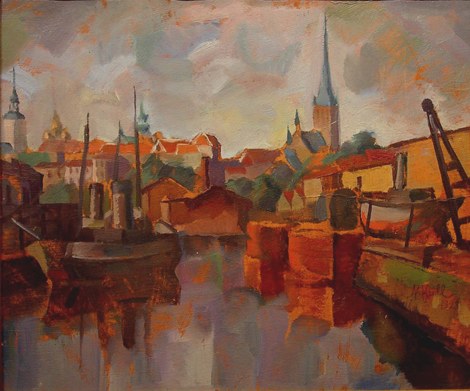 It seems that Nikolai Kull was both a seaman and an artist. In spite of learning at Ants Laikmaa and graduating from "Pallas" under the supervision of Nikolai Triik, Kull always remained to "look with one eye" at the sea. As a seaman's son, he himself also worked for some time on a ship and in the marine fortress, as an artist depicted either the port or Tallinn under such angle, which is seen by a sailor, having just stepped ashore.
The current work is very characteristic to Kull's creation because of its choice of motifs, but surprising from the handling manner. He made several Tallinn views at the end of the 1920ies that slightly toy with cubism-style of stylized forms. A specific afterglow to the geometrism-fascination of the beginning of the 1920ies is still considerably softer and viewer-friendlier. Sort of sudden depiction of the port joins together both the Tallinn history and its essence - to be unseparably connected with the sea.